Sometimes, design flaws are only apparent after having experienced a solution. Especially when they are really, really subtle. Most people won’t care about these nitpicky points, but for the few who do…

This post is not meant to be comprehensive. I’m sure there are plenty of mitigating benefits to both browsers when thoroughly compared. However, as a long time Chrome user recently having switched to Safari, I’d like to complain a little bit about a few Safari UX flaws in contrast to Chrome’s solutions.

Along with 40 million other people, I use my laptop to watch Netflix. Like many other people, I’m used to pressing the space bar to pause the video. The issue here arises when I fast forward or rewind by using the arrow keys. In Safari, after 1) pausing the video, and 2) pressing an arrow key to jump forward or backwards, pressing the space bar triggers the episode selector, not play/pause. Sometimes. This depends on whether you’ve clicked on the video since having pressed play. The result is that I have to find the pointer, click away from the episode selector, and then press the space bar to resume watching.

When viewing Netflix in Chrome, the space bar, without fail, toggles between play & pause. Simple, predictable, intuitive… thanks Chrome 🙂

When you close a tab in Safari, it brings you to the tab immediately to the left of the one you closed.

When you close a tab in Chrome, it brings you to the tab that you had been viewing previously.

Say you’re reading an article. You come across a claim of dubious veracity and decide to open a tab, search the phrase, find an answer, and close the tab to resume reading. But instead, Safari brings you to the next tab in the list, which has nothing to do with your article. So you switch tabs until you arrive at the right one, sometimes distracted by the other trains of thought you encounter on the way.

It is software’s job to get out of the way of users’ thought processes and facilitate the completion of our tasks. Safari just got in the way.

3. Dragging an image into a tab

In Chrome, I can click & drag an image from anywhere, hover over a tab, that tab would open, and I could place the image wherever within that tab  — say, a wordpress post composer, or an email client.

In Safari, you can drag an image from anywhere, but hovering over a tab does nothing. The solution is to simple enough – right click, copy the image, and then paste it where you’d like to go (or download the image, upload to imgur etc). But dragging and dropping is so nice… This is not a ‘flaw’, per se, but a feature I’d like to see replicated in Safari.

Bookmark issues, sadly, can be found in both Chrome and Safari.

After importing my bookmarks from Chrome, I spent an hour or so managing my Safari bookmarks, rearranging them, deleting copies from previous imports, etc.

The next time I quit and reopened Safari, it had reverted back to the way it had been initially. I have no idea why. Maybe it synced with iCloud? Maybe I imagined managing my bookmarks in the first place? Thanks, Safari, for making me doubt my sanity.

In Chrome, one time I decided to try sorting my bookmarks alphabetically. It quickly became apparent that this was not helpful in locating the link I was looking for, but I couldn’t find any way to undo that action. Apple + Z did nothing. There was no obvious ‘revert to original’ or ‘sort by date added’ button. I could be (and probably am) missing something here, but that single click of the mouse turned 400+ links, once a chronological representation of my ‘entrepreneurship’ themed internet explorations, into a list of links that I now find largely useless beyond using the search function.

Finally, in both Chrome and Safari, recovering lost bookmarks is WAY more difficult than it should be. The search ‘how to restore lost bookmarks Safari / Chrome’ (which pops up in suggestions immediately) returns these helpful tidbits from Google: 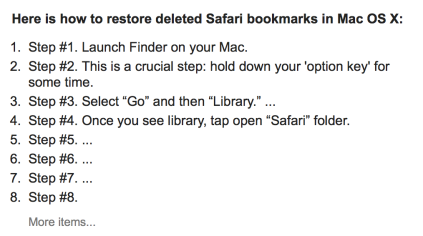 As an average computer user, I should never have to dive into my computer’s system files just to find the epicurious recipe that I bookmarked last August. All it takes is a single tap of the delete button and the bookmark (or bookmark folder!) is gone, with no recourse except for locating/restoring the bookmarks file on your computer. This should be fixed!

Say you’d like to close a tab. Generally I hit command + W. But what if you miss?

One tap of command + Q and it’s all over, folks. Safari quit. Then you wait for it to finish quitting, restart Safari, restore all tabs, youtube videos start playing, and three minutes later you’re back to where you started.

But Chrome has my back. Simply tapping command + Q triggers this message, Hold ⌘Q to quit. Brilliant!

And for anyone wondering why any sane person would ever switch from Chrome to Safari, unfortunately I found that Chrome was crashing my computer. I don’t know why, but after a few weeks of spectacular glitchy frozen screens and holding down the power button to reboot, I abandoned ship and begrudgingly moved Safari back onto my dock.

And … Sealed is closer than ever. To be part of the next wave of beta testers through TestFlight, sign up here!!